When I was vacationing in France last year, I had the great fortune to visit the small village of Roussillon in the Luberon region of Provence. It is so beautiful, like a fairy tale, and wasn't really so busy with tourists (I know, I too was a tourist!) since it was a less busy time of year. Surrounding the village the earth is streaked with many beautiful shades of oranges and yellows and sometimes purples, especially at sunset. The sea that covered the land here dried up several million years ago and rain slowly transformed the accumulated layers of limestone into ochre-bearing sands. Prehistoric man used these pigments in cave drawings. Later (much later!!), at the time of the French Revolution, man sold this pigment for paints all over the world for over a century. Now most ochre pigment is produced artificially, although I believe there are a couple of places where a little is still mined in France.

Anyway, I believe that Ochre washes on the homes in Roussillon come from the sands around the village but I'm not entirely sure. It is a colorful place full of my favorite colors!
﻿﻿﻿﻿﻿﻿﻿﻿﻿﻿﻿﻿﻿﻿﻿﻿﻿﻿ 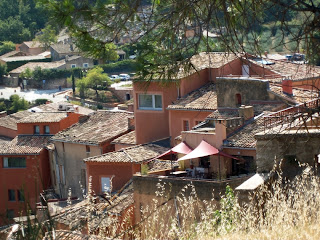 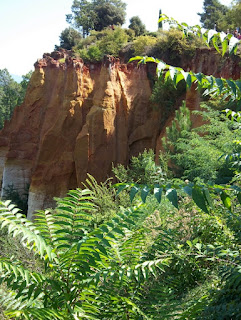