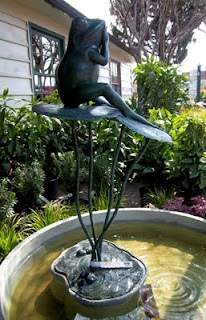 I wonder if Rodin would approve of this Thinker. This called for an investigation into the history of the original sculpture (1902) by Rodin, of which I should probably know but somehow missed. The statue was originally named The Poet and was part of a commission by the Musee des Arts Decoratifs in Paris to create a monumental portal  to act as the door of the museum. On Wikipedia it says that it was meant to depict Dante in front of the Gates of Hell, pondering his great poem. In the end, it seems only a miniature of the statue sits atop the gates of the museum. And a frog ponders flies over our garden gates! 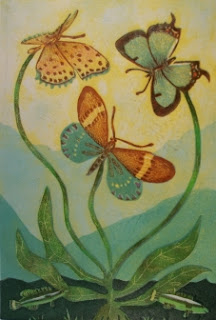 Have you ever seen a butterfly plant? Oh, it is very unusual and difficult to find. They bloom only for a short time where a pond is shallow and the small fish swim gently near the warm surface. Almost silently. Near dawn.

Email ThisBlogThis!Share to TwitterShare to FacebookShare to Pinterest
Labels: Linocut 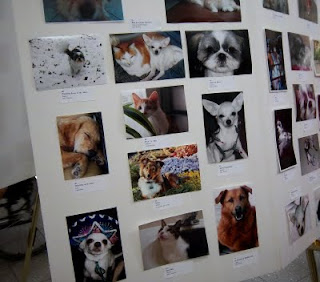 Saturday was the annual Great American Dog and Cat Photo Exhibition and party at my art center. The center partners with local Humane Societies  to promote the Art of Photography (amateur) and the love of animals. Dogs and cats are invited and other types of pets are welcome - someone brought their pig this year! I wanted to adopt this cat, it was so sweet! But here it looks exhausted - maybe too much action from too many dogs! Anyway, the guests were mostly well-behaved and I believe most enjoyed the party. (Although I noticed that one pug was frightened into its owner's lap when a much bigger dog started to sing Happy Birthday!)