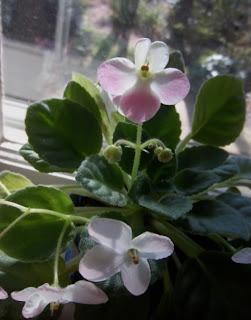 The African Violets (Saintpaulias) in my kitchen window are blooming like crazy right now. This one looks especially animated! I'd love to have hundreds of them. Or thousands.Certainly they would make great painting subjects. They don't move a lot and they are readily available! And they come in some great colors.

"Just living  is not enough"
said the butterfly,
"one must have sun
freedom and a little flower."

Last Saturday there was an event called "Incognito" at the art center where my studio is located. It is a yearly event held in January as a wine-tasting and fundraiser for the center. Artists are asked to donate 8" x 10" artworks. All artworks are sold for the same price and buyers don't know the name of the artists until after the purchases. The artists sign the backs of the works. Hence the name "Incognito". I enjoy guessing which artworks belong to which artists. Sometimes it's easy and sometimes not! This was my work: A gouache painting of Cedar Waxwings and who would guess that it's mine! 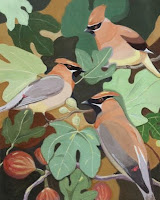 It seems that now and then I have to create a Pysanky egg. I find it fascinating that a white egg can become something so colorful! So here I am making one with a rabbit (surprise!) The photo at the top is the final result and the others show some of the process I used to create it. 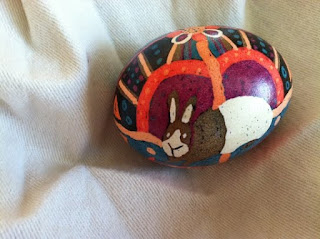 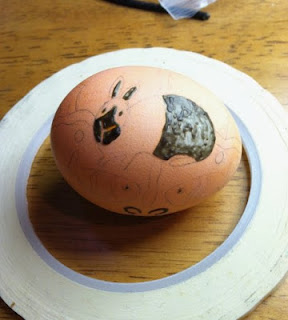 After dying the egg a light orange, I applied wax in the places I wanted to remain orange and then placed the egg in the next color. 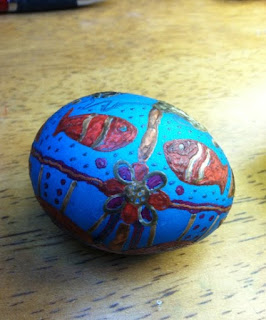 I continued by applying wax after each color dyed until I finished all of the colors. Hopefully that makes sense. If not, ask questions! 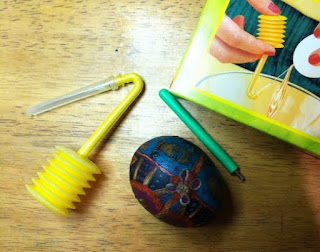 Then I had to remove the insides of the egg with this little gadget which makes it very easy. Just be careful or you will have a cracked egg! 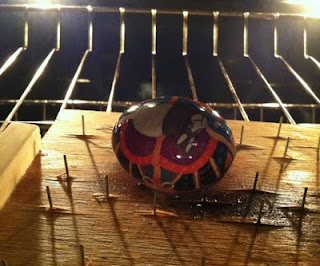 I melted the wax off the egg at a low temperature in my oven and voila! This is the best part - to see the result! (See the picture at the top.)

This has not been an easy post! There is a problem with my photo uploading feature on blogger and I had to use the HTML feature. Eash!
Posted by Anne E May at 1:46 PM 4 comments: