There is so much to see in New York City! On my second trip this year, (which is funny because I've only been there a few times in my whole life, mostly in the last three years) we knew we had to see this new sculpture designed by British Designer Thomas Heatherwick. I learned that is was built mostly in Italy in secret and brought by pieces to New York in Hudson Yards in Manhattan. It was completed at the beginning of the year. Of course not everyone would like it but I love it! I think it's very clever and interactive. 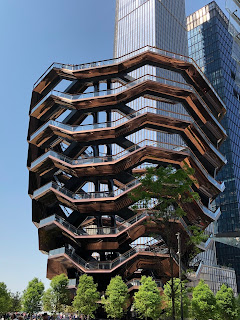