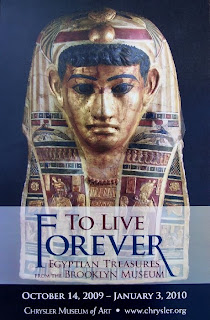 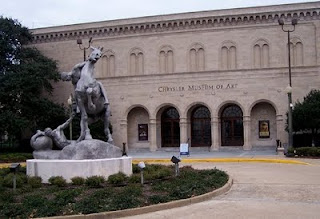 This week I visited the Chrysler Museum to see the exhibit To Live Forever, produced by the Brooklyn Museum of Art. It explains how the ancient Egyptians made preparatons for the afterlife in the netherworld with Osiris. They did this for thousands of years!! They believed that Osiris ruled the earth as a generous king and later lived beneath the earth in the netherworld, where he was king of the dead. There is the mummy of Demetrios with a description of the mummification process, which I won't describe here!! There are interesting objects that were placed in the tombs and coffins to be used in the afterlife. Anyway, it's fascinating and certainly worth a visit!
Posted by Anne E May at 6:04 PM